Today’s post is brought to you by the letter “M” 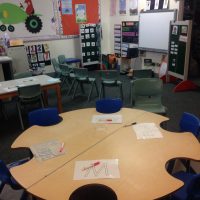 As we approach the half-way mark for the school year, many pre-prep kids are learning to write their name and count to ten.  I’m feeling pretty thankful that despite Mikey’s **atonic daily seizures (yes, another growth spurt, another meds increase) he has been healthy enough to attend both mainstream day care and the ECDP (Early Childhood Development Program).

When Katrina was half a year away from starting school, I was quietly relieved as I was pregnant with the twins (I couldn’t have timed that better if I tried).  Now, I am at that same point again but with the twins, with Jaz starting at mainstream and Mikey going off to special school next year.  At this point, I am still feeling pretty relieved that, despite the logistics of it all – as I haven’t quite figured that one out yet! – we are lucky enough to be in this position. There are some great supports around, and like anywhere, it takes time to get to know them, and navigate the system, as your child grows, and you change as a family.  We no longer have fragile premmie babies but robust, tough little-people, who have a zest for life and want to be where the action is.

The decision for Mikey to attend special school was made over summer holidays 2015/2016.  Right up until that point, I had been thinking mainstream would work with the twins going off to school together.  Over the summer break, we had time as a family for 3 whole weeks (yes 3 whole weeks the 5 of us were together!) it dawned on Bryce and I that mainstream would no longer be the option best suited for Mikey for his introduction to school.  I’m not sure at what exact time it dawned on us, that not only had we agreed on something! but we had this realisation pretty much simultaneously.

It could have been the intensity of watching Mikey closely for 3 weeks, for pretty much the whole day for the best part of those 3 weeks.  It could have been the time we lost him at the caravan park for a good 3.5 minutes, where he sneakily left his twin, to duck down between the cabins to take himself off to the toilet (even though most of the time he refuses to use the toilet!) and despite calling his name, he wouldn’t give us a ‘hey’ to indicate where he was (we are still working on that, living in a double-storey house).  It could have been that for the first 3 days out of the 5 days we were at the same caravan park, he literally was trying to drown himself in the shallow end of the kids swim pool but thought it was hilarious!  Luckily for him, and us, he stopped that by the fourth day because he realised it was taking up way too much of his energy for more important things later in the day, like eating.

Seeing him together, in that environment, told us that he wasn’t at the cognitive level, the understanding level of both safety issues and boundaries.  He was, and still remains to a large degree on most days, that of a daring 2 year old!  Of course his charm and cheekiness wins people over most of the time, but in a traditional setting with all those kids, distractions and implements, we knew that to split the twins up at the start of their schooling life was the best thing for them to get what they need individually.

After having some time off last year from ECDP due to some health troubles and again earlier in the year, he has slotted right back in with all his little friends.  There are about 5 little boys in the class, all with varying challenges.  They are all adorable and learning at their own pace in this specially catered environment.  The photo I have put up is Mikey’s room with his letter M for him to trace.  Sometimes he uses a toy, sometimes a crayon, depending on his level of enthusiasm and if his levels of energy are high.  The room is fitted out with PicCom Cards that we use at home, so there is a consistency of what we do at home, and what is used in the classroom.  The thing I love about this classroom, is that it is individually catered for the needs of the students due to it’s size.  They are learning the same content but at their level of understanding.  This is what we know Mikey needs and trying to push him into an environment where he feels pressured in his first year of school (don’t they have highschool for that?!), doesn’t sit right with me.

As with his social skills that he gains from mainstream – nothing says ‘I like you’ like a headlock and a kiss! – the kids love him and accept him for who he is. Regularly, I’ll walk through his big sister’s school and the older boys will say ‘hey it’s Mikey!’ and they’ll give him a wave – he is proud as punch.  And secretly, I am too, that these beautiful kids are just seeing Mikey the way we see him, a little cheeky kid with a big personality.

**Atonic seizures (also called drop seizures), are a type of seizure that consist of a brief lapse in muscle tone that are caused by temporary alterations in brain function.

← So what is HHE – Hemiconvulsion Hemiplegia Epilepsy Syndrome???
Campaign for Change! →

We love hearing from you! Cancel reply

This site uses Akismet to reduce spam. Learn how your comment data is processed.